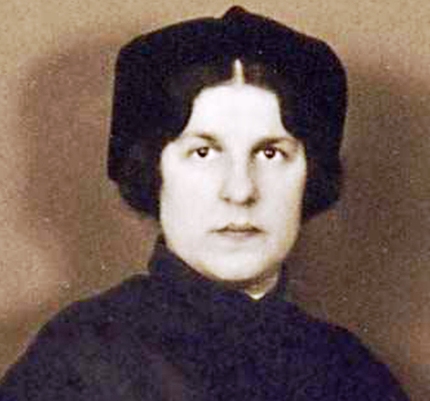 Judaism acknowledges the day of one’s death and not one’s birthday. It makes a certain kind of sense: You can only really measure the impact of a person’s life after it is over. But what if we don’t know the date of a yahrzeit? That is what happened to the first woman rabbi, Regina Jonas, who was deported from Terezin on October 12, 1944, and arrived at Auschwitz on October 14. It was Shabbat, Shabbat Bereshit, which this year falls on Oct. 18. After that there is no record of her.

It is time to honor her memory. That’s why a growing number of rabbis and Jewish leaders have designated this Shabbat, Oct. 18, as her yahrzeit and will say kaddish for her.

Born in Berlin in 1902 into a poor Orthodox Jewish family, Jonas was influenced by her rabbi, Dr. Max Weil, who, though Orthodox, allowed girls to become bat mitzvah. At his urging, Jonas continued her studies at the liberal Hochschule für die Wissenschaft des Judentums in Berlin from 1924 to 1930. All the other women in her classes were there to become teachers; Jonas, like the men she studied with, wanted to become a rabbi. Her primary supporter was Rabbi Eduard Baneth, who was determined to ordain her, but died just before she finished her training. Though her thesis—“Can a Woman Be a Rabbi According to Halachic Sources?”—received praise from her teachers, none of them agreed to ordain her, including Rabbi Leo Baeck, the leader of the Jews in Germany, who wasn’t willing to jeopardize the unity of the Jewish community as the Nazi threat was intensifying.

Jonas was ultimately ordained, in a private ceremony, by Rabbi Max Dienemann, the president of the General Association of Rabbis in Germany, on December 27, 1935. She struggled to be accepted. A 1936 article in Der Israelit cites a comment describing Jonas’ ordination as a form of “treason and a caricature of Judaism.”

At first, she worked in hospitals, homes for the elderly, and schools, but as more rabbis emigrated she began to preach in synagogues around Germany. In November 1942, she and her mother were deported to Terezin, where she worked with the famous psychiatrist Victor Frankl to care for new prisoners.

Though some survivors, including Baeck, who had also been imprisoned at Terezin, certainly knew Jonas, they didn’t refer to her by name in their writings. The reason in part may found in the forward to Frankl’s classic, Man’s Search for Meaning. He wrote that he erased from his memory everything that happened before he entered Auschwitz. Part of what he erased was the legacy of Regina Jonas.

Her name began to appear in the early 1970s. Rabbi Sally Priesand, the first woman ordained by the Hebrew Union College—Jewish Institute of Religion, mentions Jonas in her 1975 book Judaism and the New Woman. Jonas is also cited in a 1972 article by Rabbi Jacob R. Marcus, founding director of the American Jewish Archives, and by Alexander Guttmann in an article celebrating the hundredth anniversary of the Hochschule. She is mentioned in The Jewish Almanac by Richard Siegel and Carl Rheins. But in my years as a rabbinical student at HUC-JIR, from 1971 to 1976, not once did I hear her name. It would have been helpful to me, the only woman in my class, to have known her story.

It didn’t come to light until 1991, when Katerina von Kellenbach, a professor of Religious Studies at St. Mary’s College of Maryland, while doing research in a small archive in Berlin, accidentally discovered a small box of Jonas’ papers. Among them is a note dated November 6, 1942, written by an acquaintance of Jonas’, explaining that these documents were given to him on the day that Jonas and her mother were deported. Her papers included a photo of her in rabbinical robes, a copy of her thesis, and her ordination certificate.

Jonas had also kept some newspaper clippings that referred to the challenges she faced in her struggle for acceptance as a rabbi, letters from Jewish refugees abroad thanking her for taking care of their parents, and thank you notes from congregations where she had preached. This archival collection inspired Elisa Klapheck, a German native who would became the first woman rabbi in the Netherlands, to write her 2004 biography of Jonas. Most recently, Diane Groo’s documentary film Regina fills out the contours of Jonas’ story. It reveals that shortly before being deported to Terezin, Jonas fell in love with a fellow rabbi, Joseph Norden. In a letter dated July 13, 1942, just as he was about to be deported from Hamburg to Terezin, he wrote, “The time has come to say goodbye… maybe Berliners will be sent, too. In that case perhaps there will be a chance for us to see each other again.” They never did.

A few of Jonas’ papers remain at Terezin, including a handwritten list of more than 20 lecture topics delivered at the camp, including the role of women in Judaism, women in the Bible, women in the Talmud, and Jewish holidays and beliefs. All women rabbis have given those sermons, but none under such circumstances.

Women rabbis stand on her shoulders. She had been totally alone, independently ordained, unsupported by most of the Jews around her. I wonder if she had imagined us when she left her papers to be discovered. Could she have imagined the rebirth of Jewish life in Europe and the role of so many young women rabbis and activists in nurturing that renewal? Could she have imagined the flowering of Jewish scholarship from gifted women academics or the number of Reform, Conservative, Reconstructionist and, in the not so distant future, Orthodox woman rabbis? Could she have imagined the way feminism has totally transformed Jewish life so that women’s experience is no longer marginal and that women’s stories are fully part of the larger Jewish story? Now her story is part of it too.