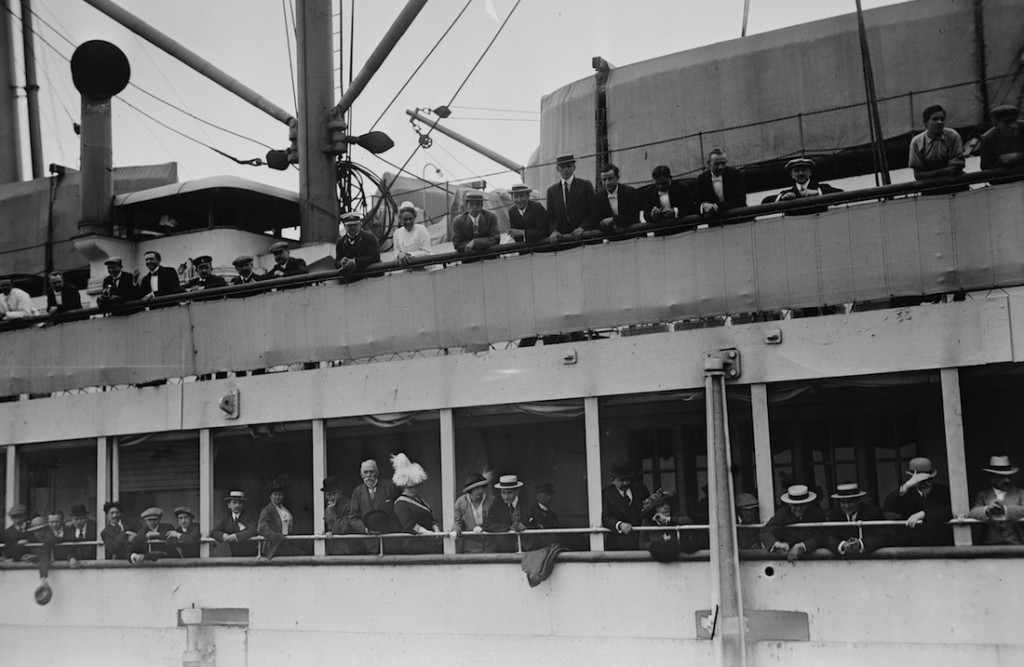 “You survive, you honor us by living,” said Martin Greenfield, now a New York master tailor, recalling his father’s words after he was liberated from the Buchenwald concentration camp.

The quote could easily be taken as the theme of “The Jewish Journey: America,” a PBS documentary tracking the migrations over 350 years of Jews fleeing Latin America, czarist Russia, Nazi Germany and the Muslim world for these shores.

The one-hour program, opening with a majestic rendition of “America the Beautiful,” will air on PBS stations nationwide on March 8th at 4:30PM and in April. The show is produced, directed and written by Andrew Goldberg, who has become the semi-official Jewish chronicler for PBS, with such productions as “The Yiddish World Remembered” (2002), “Anti-Semitism in the 21st Century” (2007) and “Jerusalem: Center of the World” (2009).

While many Jews arrived in the United States seeking refuge from persecution, millions more came for economic reasons — to build better lives for themselves and their children in the New World.

The first Jews to arrive in the future United States were 23 Sephardim who fled the Portuguese Inquisition in Brazil in 1654. They settled in New Amsterdam, later known as New York.

They were followed by Jews fleeing failed revolutions in Europe in the 1840s and later by Gold Rush fortune seekers. But by the 1870s, Jews in the United States numbered no more than 200,000.

By 1927, the American Jewish population had skyrocketed to more than 4 million, spurred by the massive influx of 1.5 million Jews from Eastern Europe, predominantly Russia, between 1880 and 1910. It speaks to the Jewish penchant for founding and then splitting into separate groups that there were some 17,500 Jewish organizations in the United States in 1927.

The mass immigration from the Pale of Settlement gives the film a chance to draw on various archives to illustrate the lives of poor Jews — the wealthy ones mostly stayed put — both in the shtetl and then on New York’s crowded Lower East Side.

Often overlooked in the triumphant rendition of the American Dream is the film’s description of the emotional price paid by emigrants as they separated from families and traditions that had bound them together for generations.

Though the new immigrants endured hard times in their adopted country, they usually wrote glowing letters of their success to the folks back home, which triggered even more immigration.

With the post-World War I recession and fear of the communist revolution in Russia came growing xenophobia, culminating in the 1924 Immigration Act, which narrowed the once wide-open entrance to the United States, especially to applicants from Eastern and Southern Europe.

A small but steady trickle of Jews arrived after World War II from displaced persons camps. More came after establishment of the State of Israel, fleeing hostility to Jews in Islamic countries in North Africa and the Middle East. Another wave arrived after the 1979 Islamic Revolution in Iran, followed by Soviet Jews in the 1990s.

Integration of the new immigrants was rarely easy. In an illuminating interview, New York Rabbi Marc Angel recalls the dual pressure from his grandfather to strive for success in the new country but still retain Jewish traditions.

Yet, Angel concluded, the real miracle was that after so many generations in America, Jews have remained Jews.

Producer-director Goldberg, who founded and heads Two Cats Productions, ascribes much of his interest in Jewish-themed films to his own heritage. But there are other reasons as well.

“For one, PBS likes our work, and also there is a community that is willing to fund such documentaries,” he said.

Only about one-third of Goldberg’s productions are on Jewish themes. Now in the pipeline are a documentary on animal cruelty and another on the interpretation of classical music.