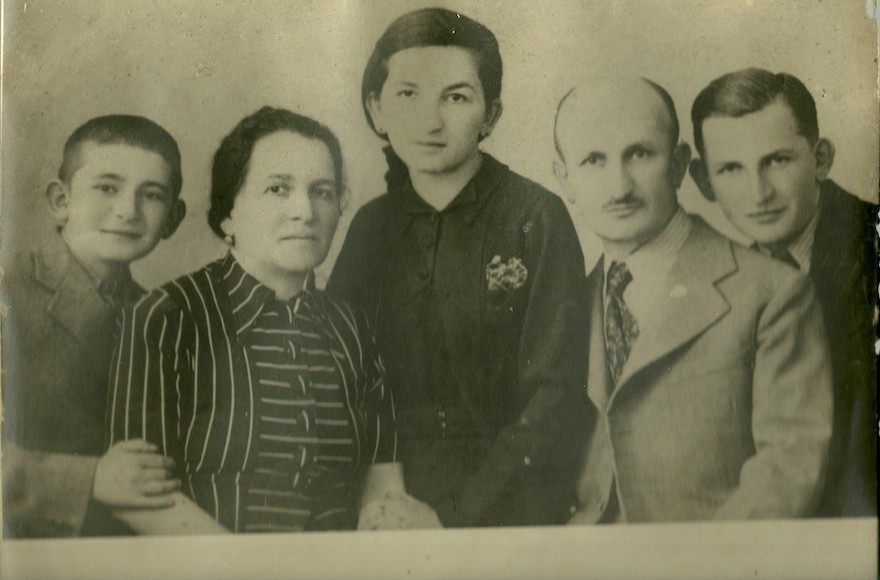 When Fabio Rosenfeld asked his paternal grandfather, Miklos, about the latter’s relatives, the response always was the same: They’d been killed in the Holocaust.

But Rosenfeld, a resident of the southern Brazil city of Curitiba, learned this summer that Miklos’ sister, Aranka, survived the Shoah. Now he hopes to find any children and grandchildren she may have had – or even locate Aranka, who would be in her mid-90s.

Rosenfeld, 43, knows nothing about his great-aunt. All he has is a family portrait that shows Miklos and his brother Lajos, Aranka and the siblings’ parents, Simon and Hermine (nee Rosenberg). Simon was a tailor who apparently served the king of Romania.

Miklos, who died at 76 in 2001, only “told me he tried to find out if she was alive and if she survived the concentration camps,” Rosenfeld recalled.

In Warsaw, at a visit in June to the Museum of the History of Polish Jews, Rosenfeld looked up his family’s records on a computer. He was shocked to discover Aranka’s name on a tree compiled by an Israeli man, Inacio Steinfeldt, and to learn that she had been liberated from Bergen-Belsen.

In a conversation with “Seeking Kin,” Steinfeldt said that Aranka’s name appeared on his tree while researching his maternal grandmother, a Rosenfeld from the Romanian town of Satu Mare – but that the two women likely are unrelated.

The revelation, however, spurred Rosenfeld to contact the former concentration camp, which supplied a September 1945 list that included Aranka’s name among those liberated and noted her being born in October 1922.

“Seeking Kin” learned more from Michal Dror-Zalishansky, who works in the reference section of Yad Vashem, Israel’s leading Holocaust commemoration institution. From postwar International Tracing Service records, Dror-Zalishansky found that the Rosenfeld clan had been deported to Auschwitz on June 18, 1944. Simon was soon transferred from there to Dachau, and was murdered on Aug. 22 of that year in its Kaufering subcamp.

Aranka was sent from Auschwitz to Bergen-Belsen. No information was available on the fate of the others or on Aranka’s postwar life.

In early 1964, according to Yad Vashem’s ITS records, Miklos wrote to the Germany-based agency in a bid to determine his sister’s fate. The ITS told him that Aranka worked as a seamstress and provided several birth years and one birthdate for her: 1922, 1923 and Sept. 16, 1920. All had in common her parents’ names and hometown of Reghin (also given as Szaszregen, in Hungarian), in Romania’s Transylvania region. The records stated that Simon, whose profession was listed as furrier, was born in 1892 or 1893; Hermine in 1896; and Lajos in 1921.

Most of the 1,682 Jewish residents of Reghin were incarcerated in a ghetto fashioned from a brick factory on the outskirts of town, according to Alexander Avram, the director of Yad Vashem’s Hall of Names and a native of Romania. Their forced move occurred on May 3, 1944, two months after Germany conquered Hungary, to which Reghin then belonged. Later that month, 4,000 Jews living in the area, including those held in the Sebsiszentgyorgy ghetto, were deported to the Reghin complex, too. From there, Jews were deported to Auschwitz in early June.

Some Jews avoided the deportation by hiding in Reghin or bribing their way out, Avram said. In Auschwitz, Aranka apparently survived the selection of those immediately sent to the gas chambers and was among those who performed forced labor. She later was transferred to Bergen-Belsen by train or arrived there on a Nazi death march as the Allies approached late in the war. The British army liberated the camp on April 15, 1945.

“It makes sense that she made it through the [Auschwitz] selection because she was fit and was sent to work,” Avram said, referring to Aranka.

Miklos was fortunate to avoid deportation and incarceration with the family, Rosenfeld said. In about 1940, Miklos’ parents unwittingly saved the teenager’s life: They sent him away upon learning that local police were searching for a criminal suspect named Miklos and had arrested many with that name. Miklos would join a partisan militia, and was captured and interned at the Mauthausen concentration camp in Germany. Following liberation, he went to Italy and in 1946 on to Rio de Janeiro, Brazil, his grandson said.

Rosenfeld, who works as an auditor for the regional government, approached the Israeli radio program “Hamador L’chipus Krovim” (Searching for Relatives Bureau) as he sought to locate Aranka, thinking that she might have settled in Israel.

“Maybe she had sons and daughters I can find 70 years after the war,” he said.