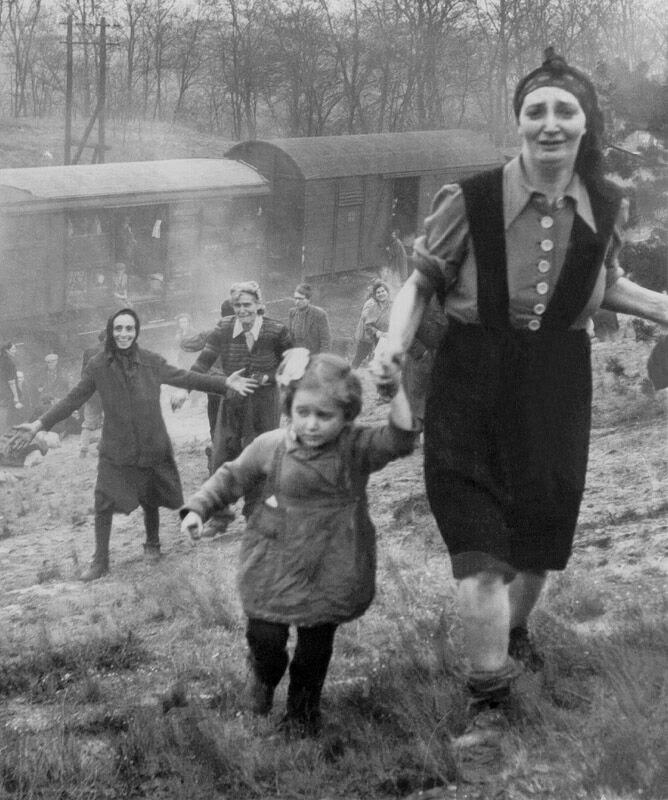 The photograph shows a girl, perhaps 4 years old, walking up an incline holding hands with a kerchiefed young woman. In the background are several other females, two freight cars of a train and barren trees.

The scene was captured on April 13, 1945, moments after they and other inmates were liberated from a train transferring them from the Bergen-Belsen concentration camp in Germany to the Theresienstadt camp in Czechoslovakia.

The image on a photography website caught the attention of Daan Ballegeer, an Amsterdam-based freelance journalist who writes a column about the mysteries surrounding photographs of historic moments.

Hoping to learn the identities of the woman and child, Ballegeer came across a “Seeking Kin” column about the train’s passengers having been freed by an American tank unit. He asked “Seeking Kin” for assistance.

Within a few weeks, the mystery was solved.

The woman in the photograph apparently is Shlima Spitzer, and the girl might be either of her two daughters. Spitzer’s husband had already been killed.

That information was provided by Bruria Falik, 83, of Woodstock, New York, whom “Seeking Kin” contacted with the assistance of Matt Rozell, a high school history teacher. Rozell and his students had researched the episode, which took place in the German hamlet of Farsleben.

Falik said she and 12 relatives were on the train, although Falik’s grandfather, Elias Spitzer, died two weeks later in the nearby village of Hillersleben, having fulfilled his desire to again experience freedom. He is buried there, and the extended family travels annually to Germany to visit his grave. Falik said she cannot bring herself to participate.

Shlima Spitzer, who was Falik’s aunt, and her two daughters settled in Brooklyn, where Spitzer remarried a prominent rabbi named Lichtenstein. The girls took his surname.

The kerchief Spitzer was wearing in the photo typified that worn by women in the Belz and Skver streams of Hasidism living in Kenderes, Hungary, the observant family’s hometown prior to the Holocaust, Falik said.

“I’m almost convinced that it’s her: [by] her composure, the way she looks in the picture,” Falik said of the woman seen in the photo.

The photo was taken by Maj. Clarence Benjamin of the 743rd Tank Battalion, the U.S. Army unit that after freeing the inmates tended to them on the tracks at Farsleben and arranged for their housing and follow-up care in Hillersleben.

It also launched Ballegeer on an unrelated search.

Examining the train’s manifest in an effort to identify the woman and girl, Ballegeer fell into an even more consuming project. A Belgium native, Ballegeer discovered that only one person on the train was a countrywoman: Lucie Hochheimer-Wolff of Brussels, 61 at liberation, who had been incarcerated at Westerbork.

From Belgian archives, Ballegeer learned that Hochheimer-Wolff’s husband, Samuel Siegfried Fritz Hochheimer, a native of Elberfeld, Germany, spied for his homeland in both world wars. Hochheimer worked as an executive of the Leonhard Tietz department store branch in Brussels, where he also served in an official capacity for the government of Chile.

By marrying a foreigner, Hochheimer-Wolff lost her Belgian citizenship, so when the family moved to Amsterdam after World War I, she had to apply for a visa to visit Belgium – an application that Ballegeer discovered in his research.

Her father, Joseph, wrote to Belgian officials on May 20, 1920, pleading for her visa request to be granted so he and his wife could see her, Georges and Madeleine.

He “explicitly emphasized that [Hochheimer-Wolff’s] request is only for her and her kids, not for Hochheimer,” and that “she had done nothing wrong during the Great War,” Ballegeer said.

That, he said, was “a clear reference to the fact that her husband did.”

Ballegeer hopes to find their descendants to learn more about the couple. He knows that Lucie was Jewish, but isn’t sure whether her husband was. He does not know whether the couple’s children went through the Holocaust.

“Just imagine if I could talk to one of their kids or grandkids who can tell something about their family history,” Ballegeer said, speaking of Georges and Madeleine.

“How did she get caught? Where was her husband at the time? I only know that he was at one point in the south of France organizing transports – it could have been transports of food, people, soldiers.”

Gaining information about the family’s life between 1921 and 1944, “even if it’s from the perspective of the grandchild, that would be interesting,” he said.

(Please email Hillel Kuttler at seekingkin@jta.org if you know the whereabouts of the Hochheimer-Wolff descendants. If you would like “Seeking Kin” to write about your search for long-lost relatives and friends, please include the principal facts and your contact information in a brief email. “Seeking Kin” is sponsored by Bryna Shuchat and Joshua Landes and family in loving memory of their mother and grandmother, Miriam Shuchat, a lifelong uniter of the Jewish people.)