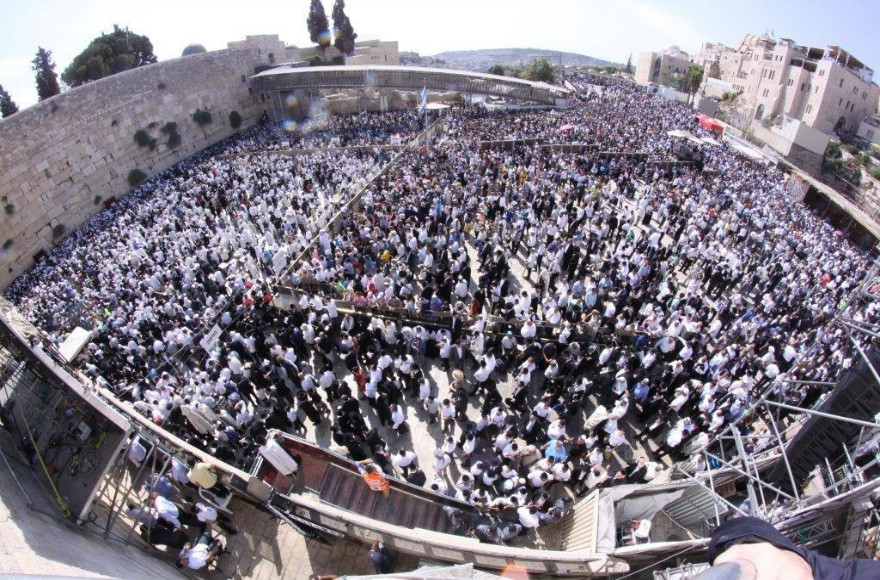 The Western Wall Heritage Foundation estimated the Wednesday morning crowd at 50,000, while media reports put the number at between 50,000 and 150,000.

The mass blessing, called Birkat Kohanim in Hebrew, is held on intermediate days of Sukkot and Passover, two of the three shalosh regalim, or pilgrimage festivals, when the Jews would ascend to the Holy Temple. The third is Shavuot. For the past 45 years, the blessing has been held at the Western Wall.

Hundreds of Kohanim, members of the priestly class in Judaism, held up their hands and blessed the worshippers, including many visitors from the Diaspora.

Israel’s chief rabbis, Yitzhak Yosef and David Lau, presided over the event along with Shmuel Rabinovitch, the rabbi of the Western Wall and the Holy Sites of Israel.

More than 3,500 police were deployed across the city for the event to ensure the safety of visitors to Jerusalem, including hundreds at the Western Wall and the Temple Mount, which has been the site of violent clashes between Israeli security forces and Muslim worshippers.

On Wednesday evening, tens of thousands of additional worshippers are expected to visit the Western Wall for the Hakel ceremony, which takes place every seven years at the end of the shmitta, or sabbatical, year.