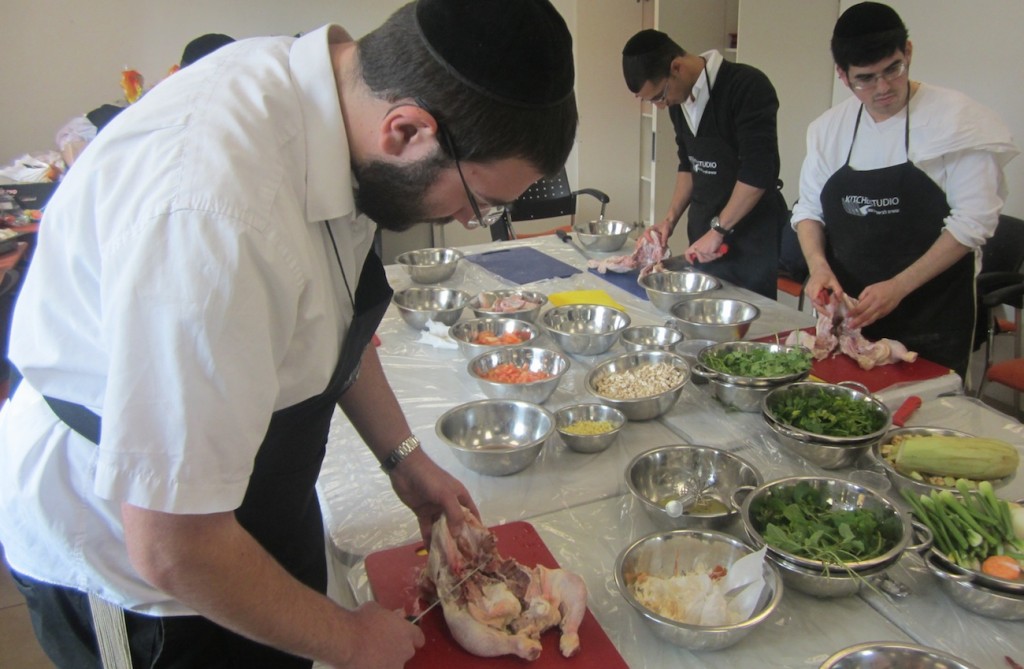 Five haredi Orthodox men are standing around a large wooden table crowded with bowls of chopped tomato, garlic, carrots and greens, their ritual fringes poking out from under their aprons. Each is wielding a large chef’s knife.

Their instructor, wearing an embroidered chef’s outfit and grasping a raw chicken thigh, tells his charges to cut the limb along the bone and pull it apart with their hands.

Hunched over their cutting boards, the men get to work.

“I like good and tasty food, and I think I need to get to a higher level,” said Avraham Blau, a haredi father of seven hoping for a career as a cook. “I’m always critical of others’ food. I always have suggestions that bug me with their food.”

Blau and his four classmates are the first students in a six-week culinary arts program run by the Jerusalem Kivun Center, a government-funded initiative launched last year to train haredi Orthodox Israelis for full-time employment. After the program, they hope to become professional chefs in Jerusalem restaurants.

Increasing haredi participation in Israel’s labor force has been a central goal of the Israeli government, which has passed a raft of legislation since 2013 aimed at integrating haredi Israelis into the country’s military and economic ranks. Many haredi men receive stipends to study Torah well into adult life and only 45 percent participate in the labor force, as opposed to 81 percent of all Israeli men.

Most of the 2,500 haredim who have attended Kivun’s classes have trained for desk jobs with minimal physical labor and relatively steady hours. But Kivun director Yehiel Amoyal said the culinary class helps meet Jerusalem’s high demand for chefs and appeals to those who want to work with their hands.

“We want to stream jobs to where there’s employment,” Amoyal said.

In an effort to help the job search, Kivun invited hotel and restaurant managers to watch the students chop vegetables. Managers offered jobs to students pending completion of the course based on, among other things, how fast they chopped, whether they maintained posture and how many chopped carrots fell on the ground.

Though seven of the initial 12 students dropped out of the course, the remaining five are guaranteed jobs in kosher Jerusalem restaurants after they graduate this month.

“Regarding inclination to cook, whoever has the motivation to learn and advance will get where he wants,” said Maor Gross, the manager of Papagaio, a South American restaurant that will be hiring one of the trainee chefs. “I’m looking for good people who want it, who have a work ethic.”

A love of cooking drove some of the students to the course.

Blau, 37, who has managed a print shop and jewelry store, revels in cooking at home and has long dreamed of becoming a chef. But concerns about cooking non-kosher food and working with women kept him from culinary school until he learned of Kivun’s course.

“I have a lot of experience with meat, and I was weak on dairy,” said Blau, who now enjoys making lasagna and quiche and will work at a branch of Cafe Cafe, a chain of upscale dairy restaurants, after the course. “Cooking entrecote, I would do it too well done. Now I do it medium-well and it’s much juicier. That raised my skill level.”

The course, which meets two to three times each week, covers 21 cooking skills, from desserts to pasta, meat and fish. Instructor Itai Farkas calls it a crash course in what can be a demanding profession.

Cooking may prove difficult for haredi men, as restaurants and hotels often demand they work nights, weekends and holidays — times the men are used to spending with their families. But Blau says he’s willing to make that sacrifice to pursue a craft he loves.

“If I have a career and a salary, it’s worth it to take evenings, Saturday nights and minor holidays,” he said. “In a few years I’ll have experience and a salary, and the ability to go far.”