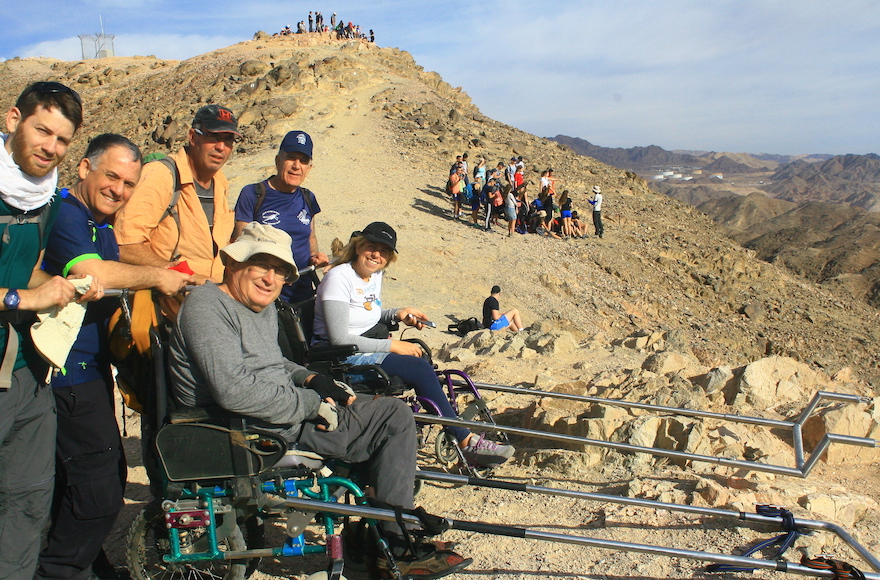 After a missile strike during the 1973 Yom Kippur War left Omer Zur’s father paralyzed from the chest down, his dad vowed to continue life as normal. But there was one Israeli pastime he couldn’t enjoy: hiking.

In 2008, Zur decided that he and his wheelchair-user father would complete a 300-mile trek in southern Turkey. With the help of dozens of friends who joined them on segments of the hike, Zur and his father were able to complete the trail, sleep in tents and cook meals over an open fire.

The hike sparked Paratrek, a startup Zur founded in 2014 that aims to make hiking accessible to people with paraplegia by outfitting wheelchairs with accessories that enable them to travel over rough terrain.

The company is one of several startups focused on improving the lives of the nearly 1 million Israelis with disabilities.

“We very much think one of the missing approaches in the world of disability is the entrepreneurial approach,” said Shira Ruderman, director of the Ruderman Family Foundation, which supports A3I. “We wanted to work with organizations that are not disability oriented.”

Here are five Israeli companies helped by A3I that are making the world more accessible to people with disabilities.

Zur and his co-founder, Ziv Demeter, saw no reason why people in wheelchairs should not enjoy a hike. So they outfitted a chair with oversize wheels, mountain bike-style tires and a wide rod in back for easier pushing. A U-shaped harness attached to the front allows it to be pulled like a rickshaw.

Zur and Demeter also act as hiking consultants for would-be hikers. Understanding their clients’ physical limits and where they want to hike, the company can set up a trek and even join in to make sure all goes smoothly.

The pair have set up hikes across Israel, as well as in France and, later this year, in Switzerland. They’re also looking into using rescue equipment to help people with disabilities climb mountainsides.

A pair of glasses normally would be useless to a blind person. But Zeev Zalevsky’s glasses don’t help you see what’s in front of you — they help you feel it.

Zalevsky’s startup, IC Touch, makes glasses that take and process a picture before sending a signal to a set of tiny mirrors that are millimeters from the wearer’s eyes. The mirrors then send a set of vibrations to the cornea that make the cornea “feel” objects in the space around it.

Instead of guiding themselves with a stick or a dog, Zalevsky says, blind people can feel their surroundings with the glasses, even identifying objects up to a half-mile away.

“It’s like if you close your eyes and feel your surroundings with your fingertips, you can imagine what’s in front of you,” said Zalevsky, an engineering professor at Bar-Ilan University. “Instead of reaching out in front of you, the picture comes to your head.”

The screen looks a little like the classic 1980s arcade game Frogger, in which an amphibian tries to cross a busy street. In this version, a red car has to maneuver through blue cars to reach an open lane — but instead of using buttons and a joystick, players move the car by raising a pole from one notch to the next. Sensors in each notch capture the motion and project the car’s progress on an iPad.

The game, the initial offering from the startup Gemon, helps strengthen the upper back of people with disabilities or those recovering from an injury. The company aims to “game-ify” rehabilitation to relieve the tedium of staring at an exercise machine all day. Co-founders Tomer Yannay and Ohad Doron are also creating a sensor that can be attached to any workout machine to transform the exercise into a game. Eventually, Yannay says, the games could even appear in health clubs.

Adira was eight months pregnant and about to become a single mother, but she had a problem: She couldn’t take her baby for a walk.

Adira is in a wheelchair and can’t push a stroller. So she contacted Dana Yichye-Shwachman, a designer with Jonathan Bar-Or Industrial Design. Yichye-Shwachman responded with Easy Stroll, an aluminum attachment to the wheelchair’s footboard that latches on to a stroller.

Yichye-Shwachman posted a video of the product online and received 30 emails for new orders. She is now creating a prototype that will fit a variety of wheelchairs and strollers.

Few children have to accompany their parents to the bank and explain to them that their account is in overdraft. But for Tal Bousidan, days like that were routine.

Bousidan was born to two deaf parents. With sign-language interpreters in short supply in Israel, he would fill the role for his parents, explaining to them what bank tellers and shop clerks were unable to communicate on their own.

The startup, Siman Shenagish — Hebrew for “accessible sign” — has a pilot running at a health clinic in the southern city of Ashkelon. Deaf patients tap on the iPad, and a full-time translator appears on the screen ready to translate for the doctor. The startup has plans to expand to Tel Aviv, and Bousidan hopes to provide translation in other languages in the future.