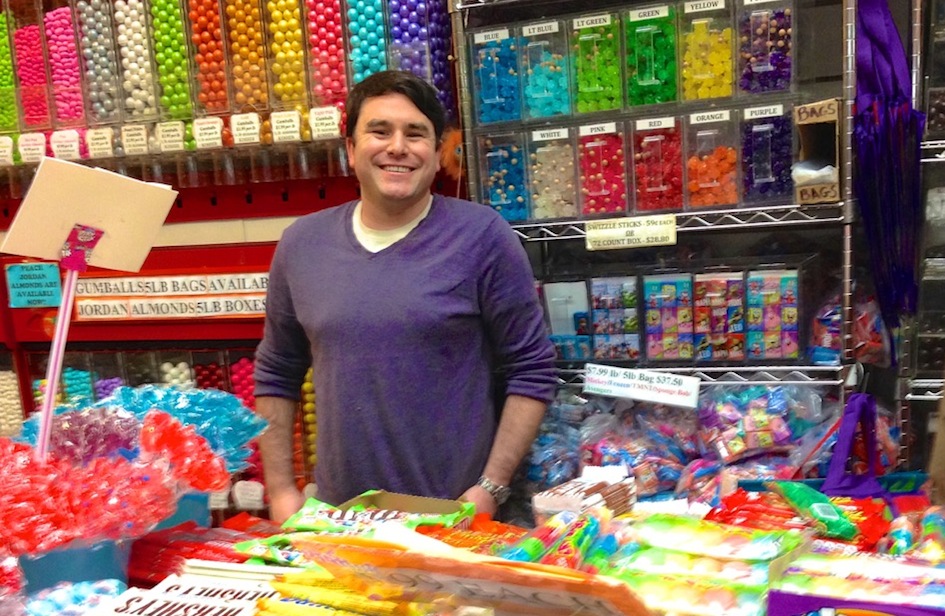 Walking into Economy Candy on Manhattan’s Lower East Side, it’s hard to know where to look first. To the foil-clad chocolate rabbits standing sentinel atop sacks of chocolate eggs? The stacks of kosher-for-Passover jelly rings and chocolate pops across the narrow aisle? The facing bins spilling over with peanut butter chews and saltwater taffy?

Make your way to the back of this Willy Wonka-esque store, past more of the 2,000 varieties of candy it sells, and the walls are lined with dispensers ready to release a rainbow of gumballs and jellybeans.

At a time when venerable Lower East Side companies like Streit’s Matzos are selling their increasingly valuable land to developers and departing, the decidedly old-school Economy Candy is holding firm.

Mitchell Cohen, who took over Economy Candy from his father two years ago after leaving his job at a leading investment bank, spent every Sunday he wasn’t in Hebrew school, and each school vacation, helping his parents at the store. Now he gets a regular stream of calls from people wanting to buy the building.

Cohen’s grandfather, Morris “Moishe” Cohen, started the business in 1937 as Economy Shoe, a repair shop with a pushcart in front selling candy and dried fruits. When Moishe, whose family had emigrated from Greece, returned to the Lower East Side after serving in the Army, he and his brother-in-law took over the place and renamed it Economy Candy.

Moishe Cohen’s family lived for a time on the third floor of the building that houses Economy Candy, back when it was a tenement. He died in his sleep last month at 97.

Today, Economy Candy inhabits all three stories, with the upper levels used for storage and packing web orders. The retail space on the first floor is full of candies of every imaginable variation and is a thriving, if slightly bedraggled, remnant of the old Jewish neighborhood amid the hipster hotels and pricey boutiques that share Rivington Street with bodegas and bars.

Back in Moishe’s day, Lower East Side streets bustled with hundreds of thousands of Jewish immigrants. There were six or seven other candy stores in the immediate vicinity, says Mitchell Cohen.

“Now we’re one of the only family-owned Jewish businesses left,” he said.

With the departure of Streit’s, which baked its last Passover matzah on Rivington Street on March 1, the only other one left is Russ and Daughters, the legendary lox-and-bagels shop run by its founder’s great-grandchildren.

A few other Jewish food purveyors remain — Katz’s Delicatessen, Yonah Schimmel knishes, Kossar’s bialys and The Pickle Guys (who took over the famed Guss’ pickles) — but none are run by their founding families. The dairy restaurant Ratner’s shut down in 2002 and the property is now being marketed as a development site.

“The Lower East Side has gone through so many transformations since my great-grandparents — and everybody else’s — lived there a century ago that our ancestors would plotz if they saw it,” said Julie Cohen (no relation to Mitchell), director and producer of “The Sturgeon Queens,” a documentary about Russ and Daughters. “But when I’m down there I can still feel the spirit of what it used to be.”

Today there are some 14,000 Jewish households in the neighborhood, says Laurie Tobias Cohen, the executive director of the Lower East Side Jewish Conservancy, which runs tours of the area. The preponderance of residents are Chinese, Puerto Rican or African-American — and those who can afford the million-dollar apartments going up.

Still, Tobias Cohen says, between synagogues, shtiebels, and new Jewish-owned boutiques and galleries, “There’s still a lot of Jewish life kicking on the Lower East Side.”

On a recent wintry afternoon, a constant stream of shoppers flowed through Economy Candy’s aisles. Manny Rodriguez, who describes himself as a regular at the store, had just purchased a fistful of Clark bars.

“I come more than I should,” he said.

Hand-dipped chocolate-covered graham crackers and chocolate-coated jelly rings are perennially popular, Cohen says, with orders coming in from all over the country. Earlier that day, someone had ordered 300 pounds of orange jelly fruit slices.

Green tea-flavored Kit Kats, which a number of customers had come in requesting after trying them in Japan, were Cohen’s biggest challenge: None of his usual distributors knew how to get them. He called Asian grocery distributors to no avail. Eventually he found one in Queens who could procure them and he placed an order for 300 bags. They were gone in two weeks.

The current candy crush is for English Cadbury chocolates, which are newly unavailable in the United States. The main ingredient in the American version is sugar. But the ones made in England list milk as the first ingredient, and devotees are fanatically loyal to their Flakes and Maltesers.

Hershey, which owns the American rights to Cadbury, has brought trademark infringement claims against a major distributor of the British product, which stopped importing them. Cohen stocked up as soon as he heard. And while he still has some on his shelves, he knows they won’t last long.

Unlike some of his Jewish customers, Cohen isn’t overly nostalgic for the bygone Lower East Side.His grandparents had left the neighborhood when his father was still young, and he was raised on Long Island. But Cohen is getting married in May, and he hopes to have children who will one day take over Economy Candy, as he always knew he would. Rivington Street will likely be different when they do.

“A lot of the stores — whether they’re old or new, candy shops or jewelry designers — are quirky one-offs where you can find the owners working behind the counter. And there are still a few places that drag their shmattes out onto the street to sell at a bargain price,” Julie Cohen said. “So even though most of the residents and retailers aren’t actually Jewish anymore, I guess I’d say the whole place is still actually pretty Jewy.”