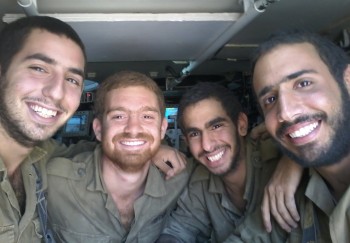 During combat and after, lone soldiers look to each other for support
By Ben Sales - JTA

When Shir Kleyman, an infantry instructor for the Israel Defense Forces and a Los Angeles native, found out that someone named Sean had died fighting in Gaza, she knew the army had lost a fellow lone soldier.

The official announcement came soon afterward as Kleyman, 19, was sitting in a Tel Aviv cafe on furlough: The fallen soldier was her friend, Texas native Sean Carmeli.

Kleyman, who joined the IDF in January, knew both Carmeli and fellow Californian Max Steinberg, who died alongside each other in Gaza on July 20. Though Steinberg and Kleyman grew up in the same Los Angeles neighborhood, they met only when serving kitchen duty together in the army.

At Steinberg’s funeral, Kleyman stood in the honor guard across from Steinberg’s parents. She called the funeral “the hardest thing I’ve ever had to deal with in my life.”

About 2,800 soldiers are serving in the Israeli military despite not growing up in the country, according to the Lone Soldiers Program, which provides them with social and other services. Three have died in the current conflict with Hamas: Along with Carmeli and Steinberg, French immigrant Jordan Bensemhoun was killed on July 20.

Most native Israelis, for whom army service is both a national obligation and a rite of passage, have networks of family and friends who served before them to help handle the deaths of comrades in war. But military volunteers whose families remain abroad say their strongest support is each other.

“They become your second family,” said Ron Gordon, who joined the IDF in 2012 after stints growing up in Europe, Atlanta and east Asia. “You don’t have anyone else here. You live with your friends.”

Because of the shared experience of joining an army while struggling with a new language and culture, lone soldiers say they relate to each other even if they never served or lived together. For those who join the army soon after moving to Israel, fellow lone soldiers are often their first friends in the country.

Infantry instructor Tal-Or Cohen joined the IDF five years ago after growing up in Maryland. When she was called to reserve duty during the current conflict, Cohen made sure to befriend and help out younger lone soldiers serving with her.

“Culturally the army is a place we’re not raised to know,” Cohen said. “The different sects and cliques, we don’t know what to do with them. Who do we trust? When I meet other lone soldiers, there’s an automatic connection because it takes a lot of strength and determination to be here and continue to be here.”

Many lone soldiers meet each other through Garin Tzabar, a program that houses groups of lone soldiers together on kibbutzim and provides a framework for guidance and support. Cohen left the program three years ago, but she remains in near-daily contact with her cohort. During her reserve duty last month, she would often check in with fellow lone soldiers by text message.

During fighting, Gordon says the distinction between native Israeli and lone soldier stops mattering because everyone is focused on staying alive. But the divide returns, he said, once soldiers take leave.

“The first thing you want is to throw off your uniform, get in the shower and eat mom’s food,” Gordon said. “For lone soldiers at the kibbutz, you don’t have that.”

Josh Flaster, who runs the Lone Soldier Center, said the first weeks after returning from the front are critical. His organization, which was founded in memory of Philadelphia native Michael Levin, who died in combat in 2006, has hosted barbecues in recent weeks to help returning soldiers begin to unpack their experiences.

“There’s lots of stigmas in the army and society about therapy and mental health,” said Flaster, a former lone soldier who joined the IDF in 2006. “If you don’t start talking about it and dealing with it, this type of stuff can mess up your life for decades in the future.”