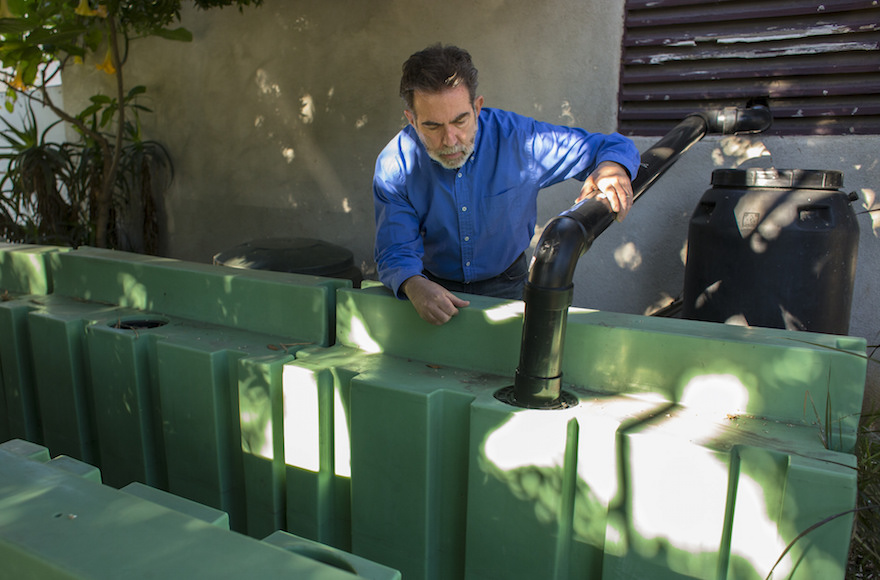 Celebrating Sukkot in a time of drought
By Edmon J. Rodman - JTA

While preparing for Sukkot in drought-ridden California, I hoped that the holiday’s joy had not dried up alongside much of the state’s water supply. For a holiday also called “the season of our joy,” one that celebrates the harvest and is filled with greenery and fruit, I worried about how the lack of rain would affect our celebration here and in other areas of the parched West.

In my Los Angeles neighborhood, trees were dying all around, including a birch in my front yard that reminded me of one from my childhood home. And in a season when the shaky sukkah is meant to represent the fragility of life, fire was giving us the shakes as well. At Rosh Hashanah, we heard that the entire town of Middletown, in Northern California, had burned down. A first cousin of my wife lives there; luckily he and his wife were not home at the time and their home was one of the few not destroyed.

Southern California is in the fourth year of drought. From 2011 to 2015, the recorded total for rainfall in downtown L.A. was a record low 29.14 inches. Forests and hillsides across the state are brown, parched and ready to go up in flames, as they did in the Valley Fire in Lake County. The Valley Fire has blackened over 75,000 acres, making it the fourth most destructive wildfire in California history.

To adapt to the water shortage, some of my neighbors were removing their green lawns and replacing them with rocks, bark and artificial grass. Would my sukkah need to adapt as well? According to the Rabbinical Assembly and other sources, the skach, or roof covering of the sukkah, must be of material that grew from the ground. But with everyone in Los Angeles required to cut back on their watering, would there still be enough palm fronds around — most Angelenos use the fronds for skach, since windy days often find my neighborhood streets littered with them  — to cover my sukkah roof? Would my celebration of Sukkot somehow endanger the trees, even the palms?

Wondering how my city’s trees were faring, I spoke with Andy Lipkis, the president of an organization called TreePeople, which he founded in 1973. Lipkis — who began planting trees when he was 15 years old — and his nonprofit have been leaders in the citizen-forestry movement, helping to plant about 2 million trees, and are working to “transform L.A.’s landscapes into living, healthy watersheds.”

Lipkis told me that in terms of sukkah roofing, I need not worry.

“The palm trees are not dying from the drought. There is no shortage of palm fronds or other potential greenery,” he said, much to my relief. But just as quickly he added that due to the drought, we were at a “point of risk.”

Lipkis had seen the trees dying around L.A., including the ones in the park surrounding his organization’s headquarters.

“We’ve lost dozens of big old trees,” including oaks, he said. The situation is exacerbated because ground squirrels and other rodents, looking for water, eat the tree roots, which results in the trees turning brown and eventually toppling, he said.

He reminded me that especially in this time of drought in semi-arid Los Angeles, “we are in the sukkah to connect with the sources of our lives, our food and our water.”

Lipkis also wanted me to think about why Sukkot, his favorite holiday, was created.

“The rabbis, way back, knew that people forget about the vital importance of trees in sustaining our lives, including producing our food,” he said.

Trees “act like tanks capturing the rain in their sponge-like area of their roots. Instead of the water running off, they put it back in the aquifer,” said Lipkis who has used his expertise in water management and technology to influence policymakers in city government.

Realizing that water-wise, “the infrastructure we built can no longer be relied on to meet all our needs,” and acting very much like a tree, Lipkis has come up with his own plan to capture rainwater — a plan to which city agencies have been paying attention.

Using a system built from a connected series of plastic, hollow highway barriers — in their usual use, are filled with water to give them weight — Lipkis has devised and placed on the side of his house a “temporary, experimental, 1,000-gallon” cistern to catch rainwater running off the roof via a downspout.

“You do a little re-engineering,” said Lipkis, who recalled that in the Bible, the kings who built cisterns in the arid land of Israel were celebrated.

During a recent storm here on the second day of Rosh Hashanah, Lipkis, awakened by the rain, rose at 3:45 a.m. to find the system already had 200 gallons, he said. By 7 a.m., when Lipkis went off to observe the holiday, the cistern was full, he said.

As a result, the lemon, lime, olive and fig trees that have been struggling in his front yard are now being sustained with the water he has collected.

Lipkis — who usually builds a sukkah out of giant timber bamboo and a few palm fronds thrown on the top — said he won’t be constructing a sukkah this year. Instead he’ll be using his energy to help 10 other households to install a similar cistern system in their yards.

Later that day, inspired by our conversation and with cisterns on my mind, I went into my backyard. I found a wheelbarrow filled with four inches of water from that same Rosh Hashanah storm. I poured it onto a struggling lemon tree that would soon fill my view from the opening of my sukkah.