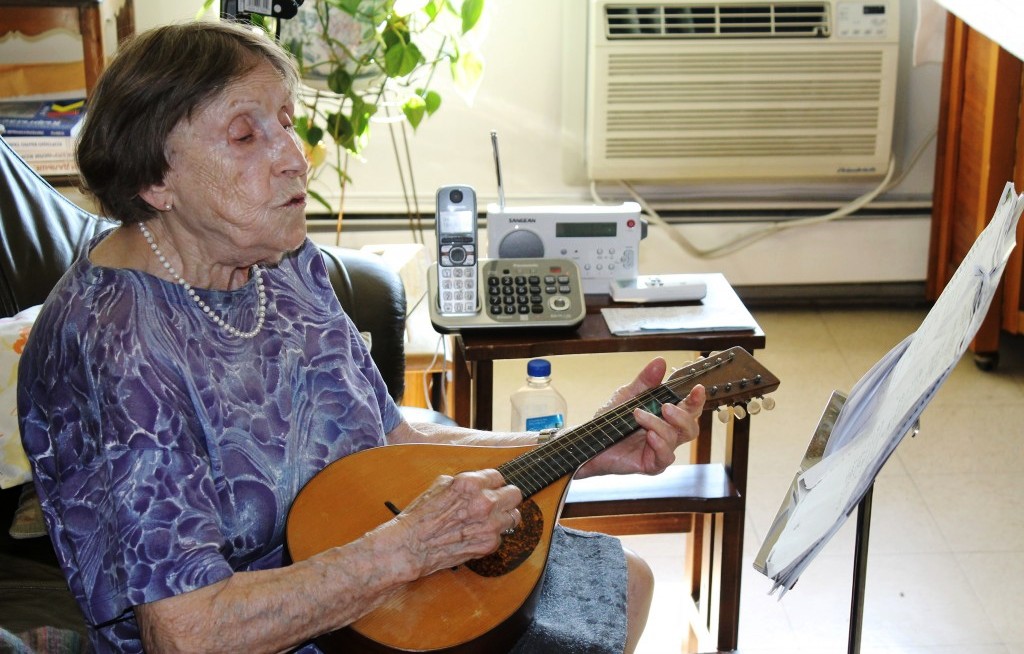 For Emily Kessler, a Holocaust survivor, the prospect of performing at Lincoln Center’s Avery Fisher Hall is less worrying than figuring out what to wear for the occasion.

“I came to the conclusion,” she said, in an interview at her apartment on Manhattan’s Upper West Side, “that what is the difference between playing in front of three people instead of 300?”

At 97, Kessler is short and slightly hunched. Along with old photographs and birthday cards, prescription pill bottles are scattered throughout her apartment.

Nevertheless, the soon-to-be 98-year-old is still sharp. And although she moves at a crawling pace to retrieve old black-and-white pictures, when she sits down to play the mandolin, her fingers work just fine.

Kessler will perform and sing songs in Yiddish and Russian Monday night at the 80th Anniversary Benefit Gala for the nonprofit organization Blue Card — the only organization in the United States solely dedicated to providing assistance to Holocaust survivors like herself.

“To be prepared,” she says, “is to respect other people, and to respect yourself, your dignity.”

She had no chance to prepare in 1941, when Nazi officers came to her home in Khmilnyk, Ukraine and shot her parents and brother in front of her. And nothing could have prepared the young widow (her husband, a Soviet soldier, was killed during the Nazi invasion) to care for her 2-year-old son in a Ukrainian labor camp, to treat the open sores on her wrists and arms with nonexistent medical supplies, or to gather the strength for work — construction and toilet cleaning — without food or water.

Somehow she did, however. And her survival, which she calls a “miracle” still confounds her today.

“How did we manage there without food or water? I don’t know, for that, I try not to explain, because it’s difficult.”

Kessler eventually escaped the camp, bringing her son along, using false papers. She lived on the run for two years before relocating to Kyrgyztan. There, in her late 20s, she tried to reassemble the broken pieces of her life. She graduated from university and worked as an editor in a publishing house.

But the damage was done. After the war, the “catastrophe” as she calls it, Kessler was plagued by guilt, sadness. She lived in a constant state of mourning.

“I was very sad, not smiling. I thought, ‘I don’t have the right to smile’. It felt like a crime, like I was guilty of smiling.”

The mandolin, which she began playing at age 10 in her school band, symbolized a time of happiness, so Kessler avoided it entirely.

In Kyrgyztan, where Kessler lived after the war, anti-Semitism was still rampant. So at 60 years old, knowing no one in the U.S. and speaking scant English, Kessler immigrated to the United States (her son, who now lives in Michigan,  immigrated several years after her).

For five years though, she was still “not ready” to play music. But walking in Manhattan one day in 1985, she saw a mandolin in the window of a music store.

“After time, you think to yourself, ‘how long should I be in mourning?’” she said. She bought the instrument, and has been playing for the last 30 years.

“It helped just to go away from the sadness,” she said. “It is not always good to feel this sad. I used to be on the street, and without any thinking, I would feel my heart to be full of tears. No more, now it’s okay.”

Things move slowly these days for Kessler. A cancer survivor who grapples with various health problems and relies on a pacemaker, she spends a good deal of time with doctors, but nonetheless manages to live on her own. She likes a light beer every so often, and going to Upper West Side cafes, although she thinks the portions are always too big.

She still goes on walks around the neighborhood, and is often asked what her secret is for living a long time. She shrugs, “I don’t know. My secret is that there is no secret.”