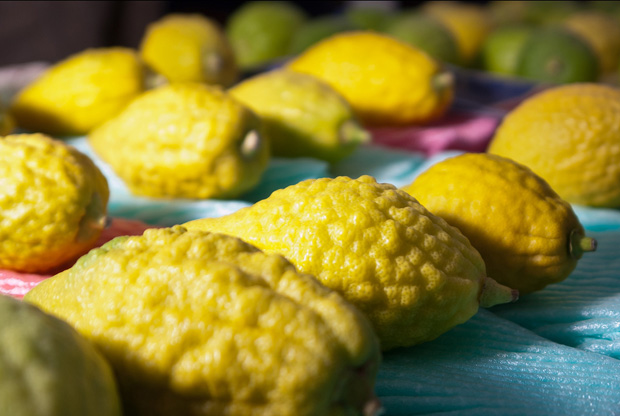 After Sukkot is Over, Don’t Discard That Etrog!
By Toby Sonneman - tabletmag.com

The citron, essential for Sukkot rituals, can be put to many wonderful uses after the holiday

There’s a Yiddish expression to describe something that has no value: “an etrog after Sukkot.” Considering that an etrog can cost $30 or more before Sukkot—the holiday in which this citrus fruit is ritually important—and yet seems to be worth nothing once the holiday ends, it’s an apt expression.

So, what can you do with an etrog after Sukkot? It would be wasteful as well as disrespectful to simply toss this exotic fruit in the garbage—especially when there are, in fact, many uses for it.

There is a rich folklore of Jewish customs concerning the post-holiday etrog. Traditionally, once it was retired from its ritual role, the etrog was turned over to women for secular uses. In The Jewish Holidays: A Guide and Commentary, Michael Strassfeld notes that the fruit, with its breastlike shape, was considered to have a special relationship to women, and a variety of Old World practices connected it to pregnancy and birth. A childless woman who wanted to bear a son was advised to bite the pitom (tip) of an etrog. A pregnant woman who ate the etrog after Sukkot, according to the Talmud, would give birth to a “fragrant” child—the equivalent of a “good” child. And a woman in labor could ease the pain of childbirth, it was said, by placing the etrog’s pitom under her pillow.

The belief that the etrog could ease the pains of childbirth also extended to jam or jelly made from the fruit. My grandmother, who immigrated to the United States from Russia, soaked etrog peel for days to decrease its bitterness and made it into marmalade, saving the precious jars of golden preserves to give postpartum mothers, including my own mother, to help them recover their strength after childbirth.

There are other classic ways of preserving etrog, or citron, that have less to do with folk wisdom and more to do with traditional uses of citrus fruits in general. The etrog can lend itself to a number of drinks. After Sukkot, John Kirkpatrick, an etrog-farmer in California, sells great quantities of the remaining fruit, as well as a related citron called Buddha’s Hand, to St. George Spirits for its citron-infused vodka. In Italy, a liqueur described as “the noble cousin of limoncello” is made with the rind of citron rather than lemon; Zaida Reuven, a Dallas supplier of etrog-and-lulav sets and author of The Esrog, calls such a liqueur “etrog schnapps” and provides a simple recipe. The citron peel could also be used to flavor other beverages, such as lemonade or sangria.

Remember, Jews aren’t the only people who use the etrog: Candied citron, in particular, has a long non-Jewish history. Since the 15th century, when citron peels were soaked in seawater brine for 40 days before being submerged in a sugar solution, it has been a signature flavor of Christmas cakes such as Italian panettone and English fruitcake. David Lebovitz, a pastry chef and cookbook author who lives in Paris, has experimented with making candied and glazed citrons. (As with all culinary uses of the etrog, it’s always a good idea to wash and scrub the peel to reduce any pesticide residue.)

Candied citron and citron preserves are fundamental to pastry making in Sicily, where the etrog (cedro, in Italian) is grown and sold. Tourists, seeing these giant citrons for sale alongside lemons and oranges at fruit stands, often remark that these are the largest lemons they’ve ever seen. But if they buy one expecting to find abundant juice, they soon realize their mistake: The pulp of the etrog is seedy and dry. The pith, however—that white spongy layer beneath the peel that is often bitter in lemons and oranges—is a wide expanse in an etrog and can be surprisingly sweet. Sicilians cut the pith into thin slices and sprinkle them with salt or sugar for a snack, or combine them in a salad with fennel, oil, salt, and pepper.

Ancient Greeks and Romans also ate etrog pith in salads, but in the ancient world the fruit’s most renowned quality—and likely what inspired Hindus and Buddhists, as well as Jews, to adopt it as a religious symbol—was what Theophrastus, the Greek philosopher and father of botany, described as its “exquisite odor.” Citron oil (“possessed of the most wonderful properties,” as one botanist wrote) became a sought-after luxury, the fragrance of royalty and affluence. In Roman times, when citrons adorned bridal chambers, it was also a perfume believed to inspire love. Botanists in antiquity offered a number of labor-intensive methods to extract the oil. One instructed the collector to rub cotton wool saturated in sesame oil onto the fruit as it grew, three times a day for 40 days. After these 120 rubbings, the perfumer picked the etrog and gently scraped the oil from the rind with a small silver spoon. Clearly the fragrance of etrog was thought to be worth such painstaking labor.

It’s far easier to make your own version of etrog-scented oil simply by infusing oil with the zest. Grate the peel of a cleaned etrog and put it in a small glass bottle so it fills half the bottle, then add almond oil, light olive oil, or another oil to the top. Set the bottle in a sunny place for a few days, shaking it a few times every day, then store at room temperature. Add a few drops of this scented oil to a bath, or fill a spray bottle with water and a few drops of the etrog oil for a pleasant air freshener.

Another way to employ the etrog’s lovely fragrance is to pierce the skin of the fruit and fill the holes with dried cloves, covering the etrog completely. As the etrog dries, it releases a wonderful scent and the whole fruit may be used as a “spice box” for the Havdalah ceremony to mark the end of the Sabbath.

If you have a green thumb, you may want to try growing your own etrog tree from seed. Remove the seeds from your etrog, wash them, and plant them in a well-drained potting mix. Keep the plants warm and moist, and repot when necessary. If you are patient and care for your citrus plant well, in about four or five years you may have your own home-grown etrog to use on Sukkot—and after the holiday ends.