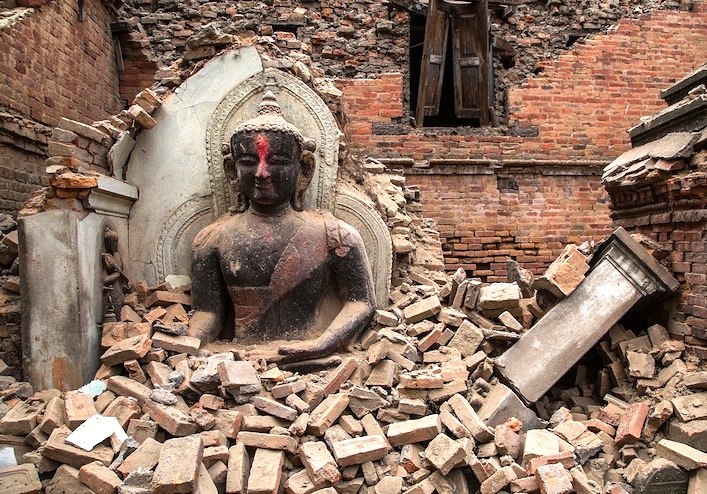 Over 300 Israelis have returned home from earthquake-ravaged Nepal, including 25 infants born to surrogate mothers.

Meanwhile, an airplane carrying an Israeli field hospital and 260 personnel landed in Kathmandu on Tuesday following delays due to weather and the condition of the runway in the capital. The hospital, which will have the ability to treat 20 people a day, was expected to be operational by the next morning.

Two Israelis reportedly refused to be evacuated from Nepal, saying they wished to stay and help the locals.

The death toll from the quake and resulting avalanche has risen to above 5,000 and could climb as high as 10,000 Nepalese officials said.

On Tuesday, Israeli Foreign Minister Avigdor Liberman spoke with his Nepalese counterpart and conveyed the condolences of the Israeli people on the great loss of life in Saturday’s earthquake, according to the Foreign Ministry. He also thanked Nepal Foreign Minister Mahendra Bahadur Pandey for Nepalese assistance in rescuing stranded Israel.

After Nepal quake, some 100 Israelis are reported missing
By Ben Sales - JTA

Some 100 Israelis remain among those reported missing two days after the 7.8-magnitude earthquake that struck Nepal on Saturday, killing more than 3,700 people.

No Israelis have been reported dead, according to the Israeli Foreign Ministry.

When the earthquake began on Saturday, Kathmandu Chabad Rabbi Chezki Lifshitz was in the middle of the Torah reading, but stopped when he felt the ground shake.

It was “as if a small windmill was underground and was moving the entire area,” the Kathmandu Chabad rabbi said.

That night, by the end of the first phase of Nepal’s worst earthquake in 80 years, hundreds of Israelis were crowded into Lifshitz’s courtyard, huddled in their tents and sleeping bags. Local hospitals were saturated with patients, so Lifshitz recruited local doctors to treat lightly injured Israelis at his home.

“All the Israelis got here quickly and just stayed here in shock,” Lifshitz told the Israeli radio station Reshet Bet on Saturday night. “People were frightened and scared. The buildings here are swaying as if they’re a leaf in the wind.”

Nepal has long been a popular destination for young Israelis, many of whom travel there for extended periods following their years of mandatory military service. Israelis have taken to social media to share news of missing relatives. A 260-person Israel Defense Forces mission carrying 95 tons of supplies and 40 doctors departed for Nepal on Monday morning, and will remain for two weeks.

When it arrives, half the Israeli team will set up a field hospital — including operating rooms, X-ray equipment and pediatric care — to provide emergency medical services to the wounded. The other half will conduct search-and-rescue missions in collapsed buildings.

IDF spokesman Lt. Col. Peter Lerner expects Israel’s field hospital to be the first in operation in Nepal. In the past, the IDF has set up field hospitals following natural disasters in Haiti, the Philippines and Japan.

“It’s one of the missions the IDF sees itself prepared for and willing to do,” Lerner told JTA. “The Home Front Command is ultimately built to carry out evacuation-type scenarios in Israel, so they are planning and preparing and executing for buildings that have collapsed here. If we can take that knowledge and help people across the world who are in desperation, it’s the right thing to do.”

A separate, private mission organized by three Israeli emergency response organizations — United Hatzalah, Zaka and First Israel — left Tel Aviv for Nepal on Sunday afternoon and aims to stay two to three weeks. Along with search-and-rescue operations, the mission will provide basic medical care to far-flung villages near the quake’s epicenter whose health clinics are either destroyed or saturated with wounded. IsraAid, which has sent aid missions to 28 countries, and Magen David Adom are also sending delegations.

“There’s an inclination in Israel and the world to come to the center of the action, where the cameras are,” said Dov Maisel, United Hatzalah’s volunteer chief operating officer and the mission’s deputy head. “So there are lots of people who don’t get the care they need.”

In Israel, friends and relatives of missing hiker shared photos and contact information on Facebook while coordinating an extensive grassroots search online. A Facebook page, Earthquake in Nepal, Updates and Search for Israelis, went live on Saturday evening, while a public Google spreadsheet is tracking information on the missing. The Kathmandu Chabad’s Facebook page is also filled with photos and updates on missing Israelis. Two hundred Israelis were initially declared missing, but half have been located.

Foreign Ministry spokesman Oren Rozenblat surmised that many missing Israelis are “out of touch” on hikes in remote regions rather than wounded or killed. Alongside the search effort, the Foreign Ministry has provided special assistance to 26 Israeli babies born to surrogate mothers in Nepal. Eight of the babies, along with their parents, have been flown to Israel, and the rest are expected to arrive in the coming days.

“Hikers in Nepal don’t call mom every day,” Rozenblat said. “They may be in a place without reception, without a phone. That doesn’t mean they have a problem. We don’t know of any Israelis that need help, are wounded or need to be rescued.”

For many Israelis, Nepal and other destinations in south Asia have been a place to unwind after military service and enjoy a more relaxed pace of life.

“It’s recreation and leisure — it doesn’t have the intensity that Israel has,” said Chaim Noy, a professor of communications at the University of South Florida who wrote the 2007 book “Narrative Community: Voices of Israeli Backpackers.”

The Israelis now en route to the Himalayan nation are arriving for a weightier purpose.

“A person in trouble, he doesn’t care who helps him, but when he sees it’s Israel, he’s even happier,” Maisel said. “He can’t believe that they came from a small state halfway around the world to help him.”