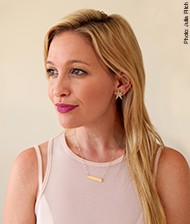 Jen Glantz is the brains behind the business Bridesmaid for Hire, the heart behind the blog The Things I Learned From, and the author (and main character) of the book All My Friends are Engaged. Her new book, Always a Bridesmaid (for Hire), published by Simon and Schuster, came out February 2017.

After moving to New York City in her mid-twenties to pursue her dream of writing—and not living on the “Upper East Side” of her parents’ house anymore—Jen Glantz looked forward to a future of happy hours and Sunday brunches with her besties.

What she got instead were a string of phone calls that began with, "Jen, I have something exciting to tell you!" and ended with, "I'd be honored if you would be my bridesmaid." At first she was delighted, but it wasn’t long before she realized two things: all of her assets were tied up in bridesmaid dresses, and she herself was no closer to finding The One. She couldn't do much about the second thing (though her mother would beg to differ), but she could about the first.

One (slightly tipsy) night, Jen posted an ad on Craigslist advertising her services as a professional bridesmaid. When she woke up the next morning, it had gone viral. What began as a half-joke suddenly turned into a lifetime of adventure for Jen–and more insight into the meaning of love than she was getting from OKCupid—as she walked down the aisle at stranger after stranger's wedding.

Fresh, funny, and surprisingly sweet, Always a Bridesmaid (For Hire) is an entertaining reminder that even if you don't have everything together, you can still be a total boss—or, at the very least, a BFF to another girl in need.