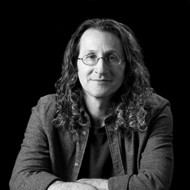 An expert on Jewish popular culture Eddy Portnoy has an MA in Yiddish from Columbia and a PhD in Jewish history from JTS. The exhibitions he has created for YIVO have won plaudits from The New York Times VICE The Forward and others.

Bad Rabbi: And Other Strange But True Stories from the Yiddish Press

An alternative history of downwardly mobile Jews, Bad Rabbi: And Other Strange but True Stories from the Yiddish Press exposes the seamy underbelly of pre-WWII New York and Warsaw the two major centers of Yiddish culture in the late 19th and early 20th centuries. With true stories of Jewish drunks, thieves, murderers, wrestlers, psychics, and beauty queens, all plucked from the pages of the Yiddish dailies, Eddy Portnoy introduces us to the Jews whose follies and foibles were fodder for urban gossip before winding up at the bottom of bird cages or as wrapping for dead fish. There’s the Polish rabbi blackmailed by an American widow, the psychic who specialized in locating missing husbands, and violent gangs of Jewish mothers on the prowl—in short, not quite the Jews you expected. One part Isaac Bashevis Singer, one part Jerry Springer, this irreverent, unvarnished, and frequently hilarious compendium of stories provides a window into an unknown Yiddish world that was.