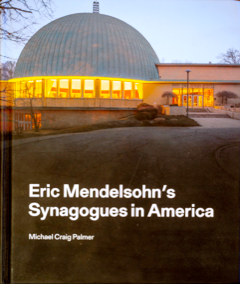 Eric Mendelsohn: Synagogue Architect with a Vision by Michael Palmer

Between the years 1946 and 1953, the American, German-Jewish architect Eric Mendelsohn built four synagogues in the Midwest.  Mendelsohn’s synagogues were the crowning conclusion of his career through tumultuous times.  In his book, Eric Mendelsohn’s Synagogues in America, photographer Michael Palmer records in detail these four Mendelsohn synagogues, located in Saint Paul, Saint Louis, Cleveland, and Grand Rapids. Palmer will employ his photographs as the foundation for a discussion about Mendelsohn, his Jewish identity, and his architectural mission. Palmer will also explain how the founding of the State of Israel in 1948 affected Mendelsohn’s plans and how Mendelsohn sought to create radically new architectural solutions for American houses of worship that uniquely met the functional, social, and spiritual demands of their respective, diverse Jewish communities.

MICHAEL CRAIG PALMER is a photographer whose work has explored the architectural legacy and relevance of the German Jewish exodus from Germany in the 1920s and 1930s. His first photo book documents previously ignored aspects of 1930s buildings in Tel Aviv’s historic “White City” district, a center for German and other central European refugees in the 1930s. Palmer’s most recent work focuses on the buildings of the noted German Jewish architect Eric Mendelsohn, including Mendelsohn’s breakthrough Einstein Tower near Berlin, synagogues in Saint Louis, Cleveland, Saint Paul and Grand Rapids, as well as his buildings in Israel. Michael began his photography career in 2015 with the Tel Aviv White City project.  Previously, he had a career in pharmaceutical industry research and development.