The Jewish Federation of Greater Orange County sponsored a group of 21 teens and their parents at the Holocaust Museum & Center for Tolerance and Education in Rockland County on March 27, 2022 to learn about Moral Courage through the lens of the Holocaust.

Linda Suss, the educator at the museum, taught the teens about the “righteous among us” who risked their own lives to help total strangers. She helped the students translate moral courage into their own lives by discussing perseverance, resilience, and resistance to hate. She reminded them that propaganda can be defined as “a lie masquerading as the truth”, and asked them if they might be exposed to that when they’re on social media. She encouraged them, while viewing the exhibits in the museum, to consider how the photos and stories made them feel, as a tool for empathizing with the people they saw in the exhibits.

The teens’ responses were powerful. Some made mention of one story of a soldier who rationalized killing children because he didn’t think they would be able to survive since their mothers had already been killed. Another said that, while looking at all the photos of the people, she wondered if she had been related to any of them.
Kathy Kimball-Wurster, Director of the Zachor Antisemitism Initiative, reminded the students that they can learn more on this important topic by participating in the Stop Hate Symposium on April 26th at 4PM at Washingtonville High School. More information can be found here.

Wendy Cedar, Executive Director of the Jewish Federation of Greater Orange County, expressed tremendous gratitude for the support of donors who made this trip and the Stop Hate Symposium a reality: the Zachor Antisemitism Initiative and the Littman Jewish Orange Youth Teen Initiative.

Pictures by Gail Conklin. Click on the thumbnail for a larger view. 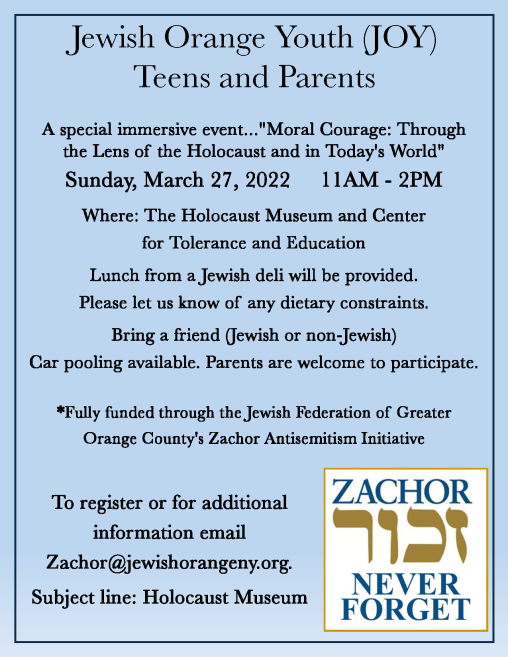