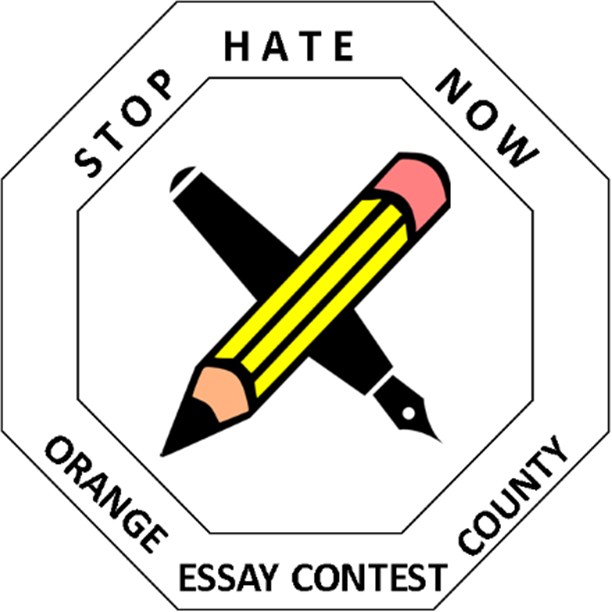 The ORANGE COUNTY STOP THE HATE contest was established by the Jewish Federation of Greater Orange County to promote tolerance and understanding through education. Joining us in this mission is the Orange County Human Rights Commission. A $200 cash prize was awarded to the winning essay from grades 7-9 and grades 10-12. In addition a $100 prize was awarded to each of the teachers of the winning students. This year we added an Honorable Mention award of $100 with $50 going to the teacher of that student.

The Jewish Federation appreciates the generous gift by Roger and Elizabeth Knight-Moss to the Zachor Anti-Semitism initiative,

Poem: The Ever Changing Face of Hate

It began with white, pointed sheets joined around crackling bonfires.

White, pointed sheets that enjoyed spreading hate, and if they said otherwise, they’d be liars.

White, pointed sheets bonding over their shared hatred of anyone not wearing a pale-skinned cloak.

White, pointed sheets that hid their faces out of fear.

White, pointed sheets that stole innocent lives and shed not a tear.

White, pointed sheets that evolved into cowards hiding behind their computer screen.

White, pointed sheets that evolved into biased government officials who don’t care if their views are seen.

White, pointed sheets that evolved into the Proud Boys.

Proud Boys that should be ashamed of their actions, but still refuse to change.

Proud Boys that trade their own humanity for white supremacist ideals in exchange.

Proud Boys that riot and invade the capitol, threatening the stability of our nation.

Proud Boys preach and cause chaos to justify their cause, without any misinterpretation.

America needs to act now and jail leaders of radical groups so they can no longer hide.

America needs to recognize discriminatory hate and not brush it aside.

America is teeming with animosity and fear; for this we should look at the Proud Boys and leer.

America needs young people to step up and fight for equality.


Our voices will be heard at the voting booth, even if they try to silence us with their frivolity.

We need more youth and minority voices in our government so injustices can be discussed.

Some people still have not grasped this concept because they harbor such power lust.

To them, it’s just a game because despite everything that makes us different,

Our souls were all created the same.

Essay: Putting a Stop to Hatred

Why has there always been so much hate in the world? Throughout history, hate groups across the world have scapegoated minorities, and blamed them for problems that weren’t their fault. Some examples of this include Nazis blaming Jewish people for Germany’s losses during WWI, or Asian people being verbally and physically attacked for Covid-19. This perpetuated hate is learned behavior that is continuously taught from one generation to the next. Westboro Baptist Church is a hate group that has harmed society, passing down homophobia and ignorance from one generation to the next.

Westboro Baptist Church (WBC) is a hyper-Calvinist hate group of around 70-80 people headquartered in Topeka, Kansas. They are known for hate speech against other Christian denominations, Jewish people, Muslims. However, they’re mainly known for their extreme homophobia. They have protested funerals of American soldiers, claiming that God killed them as a punishment for homosexuality. One example being when Matthew Shepard, a gay student attending the University of Wyoming who was a victim of an anti-LGBTQIA+ hate crime. WBC protested his funeral claiming he was being punished for choosing to be gay. WBC has scapegoated queer people as the cause of many tragedies like 9/11, mass shootings, and the deaths of American soldiers overseas. While WBC isn’t the sole reason why homophobia and transphobia are present in society, they contribute to the hatred.

However, homophobia and transphobia are learned attitudes and behaviors that are able to be changed and prevented. We can prevent this hate through conversations with friends, peers,
and family members about LGBTQIA+ issues. We have to teach others to be empathetic and keep open minds when listening to people’s experiences with homophobia/transphobia.  Listen to what others have to say and don’t dismiss or invalidate their experiences, thoughts, or feelings. Another
way to prevent homophobia and transphobia is to include LGBTQIA+ inclusive curriculum in school like history, as an example. According to The Century Foundation, “More than one-third
of gay youth have missed a day of school because they felt unsafe, and nine out of ten LGBT teens have been bullied in school, which can cause students to suffer acedemically.” This would lead to straight and cisgender students to become more accepting and create a safer environment for LGBTQIA+ students and staff.

In conclusion, prejudice and hatred are learned behaviors and attitudes that are able to be prevented. To prevent homophobia and transphobia, people should self-educate, listen to others when they talk about their experiences with homophobia/transphobia, advocate for the rights of the LGBTQIA+ community, and encourage others to do so as well. Fear stems from ignorance, when people are more educated they become less scared.

Song: All This Hate, Lyrics by Sophia Quinones

Song Description: The song “All This Hate” expresses how the Jews felt when they had to surrender to the Nazis during the Holocaust. I can’t even imagine what it was like to go through such a horrific event like that. The purpose of this song is to hopefully inspire this generation to stop the hate and treat everyone equally, the same way you would want to be treated. I believe that it just takes one person to start a movement, then people will start to follow. It’s never too late to stand up & do the right thing.

Separated, lost in a void
Got my bag with me, i'm all alone
Had a family, my daughter my son
Too soon to tell what’s going on
I look out at the trains, see guns in my face
They say, “Get over here, hurry up”!
I see my daughter’s face as she trembles in fear
My son on the other line

VERSE:
I’ve been running and running and running and running
Can’t look behind because my family stumbling
On my way down to the camp where they kill the kids
Back against the wall, you know what time it is
Searching, and looking and fearing for hope
And I ain’t the only one tryna cope
Just praying to God that He hears every cry
I’m so out of breath and I’m barely alive